I was 15 years old in 1992 when Teen Talk Barbie made headlines for saying “math class is tough”. What a blow that was to the feminist movement.

Back then I aspired to be an astronaut. Seriously. No one ever told me I couldn’t pursue my dream, so why not? In fact, my parents encouraged my interest and allowed me to attend Space Academy not once, but twice…once in 8th grade and again during spring break my senior year in high school. Those two weeks will forever rank high on my list of great childhood memories. 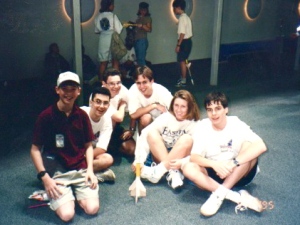 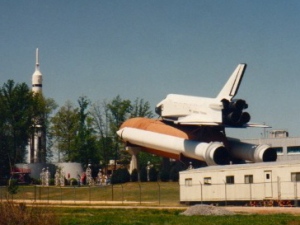 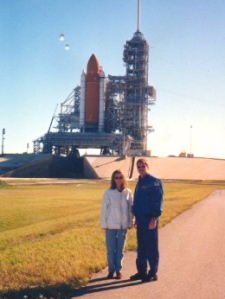 Ultimately, when I got to college I realized while I had enjoyed making rockets with my team of fellow “nerds”, scuba diving in the underwater astronaut trainer tank, and managing my post as a mission control or payload specialist, what I really enjoyed was the stimulation, interaction and “play” of it all. Translation…I wasn’t willing to do the work, put in the years or make the sacrifices necessary to achieve the dream. So I became a communications major (insert chuckle here).

My choice to abandon my dream had nothing to do with Teen Talk Barbie. At the time, the American Association of University Women took issue with the careless words of this tween toy and demanded Mattel remove them from Barbie’s vocab (which Mattel did). The AAUW cited a report which concluded girls were being short-changed in schools. Maybe those words discouraged some girls from pursuing fields of science or math? Probably not. [I attribute my detour to merely growing up and being aware of my strengths and power of choice. Oh, and I’ll give Lynn Moody credit, too. She was a top-notch communications prof during my freshman year in college (shout out to Danville Area Community College), who inspired and motivated me to study the psychology of how and why people interact and socialize, and ultimately find my degree in public relations.]

Fast forward 20 years (wow, really?) and gender lines are still drawn. Becoming a parent puts this fact in clear view – beginning with the tiny hat bestowed on baby’s head in the hospital and ending at the current 19% earnings gap between women and men. While I have the ability to filter and the confidence to strive beyond stereotypes, my impressionable 4-year-old daughter, Gemma, is a sponge.

I see the gender lines drawn down every toy, athletic and clothing aisle in department stores. G is a princess through and through. And I must admit I fell into the trap early on…pink, pink, pink (well her room is blue but only because I saw a lot of pink in her future). We’ve got a playroom full of sparkles and crowns; princess dresses for each day of the week; “my first purse”; a play kitchen; Strawberry Shortcakes, Disney princesses and My Little Ponies galore. We’re pretty balanced, though, with matchbox cars, a train set, balls, Legos (albeit the Friends line which boasts a horse stable and pink convertible for little girl Lego-people), fireman and train engineer dress up clothes, Play-doh, and building blocks. And thank goodness the female characters in Gemma’s books offer strong role models and teach sharing, manners, healthy lifestyle and friendly behaviors. I’m not sure I remember a moral message from my favorite cartoon of yesteryear, Jem (and the Holograms).

As her parents, Ben and I embrace her glittery personality and realize it’s our job to encourage her to reach beyond the “pink” and instill a solid foundation in reading, math and science.

Almost daily, I encourage Gemma’s help in the kitchen, which may seem gender-biased, I know, but it’s clear she’s learning so much more than just “mommy cooks dinner”. She’s learning how to measure, seeing how ingredients react to heat (in the oven and on the stove) or air (with mixing or whipping), learning to count and tell time, expanding her palate to ensure a healthy lifestyle and lay a foundation for the desire to (hopefully) travel the world and experience places and people beyond my own imagination. 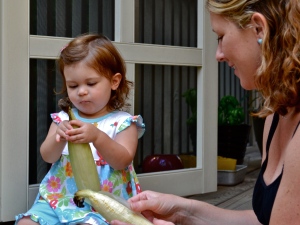 We treat her as an equal member of the household (within boundaries, of course); a tiny human with valid opinions and the same rights and responsibilities as her father and I…we require manners, respect, contributions of chores, etc.

As a family, we play card games such as UNO or BLINK to reinforce shapes, colors, numbers and critical thinking. She’s quite good…I’d estimate a .650 winning percentage. Dominos is another favorite. Ben and Gemma’s favorite activities are building with blocks and creating incredible train track designs. That said, we work on a lot of puzzles, memory games and recently picked up Magnetic SuperMind, which really challenges the player to use their spacial judgement to organize various shapes to create the pictures provided on the game cards. (Thankfully, these game sets are primary colors and not gender-specific.) I’m fascinated watching Gemma work with the shapes, seeing her determination and satisfaction when she’s able to complete a card on her own. 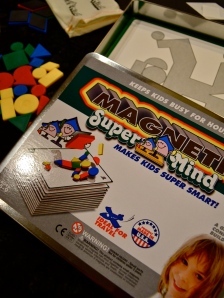 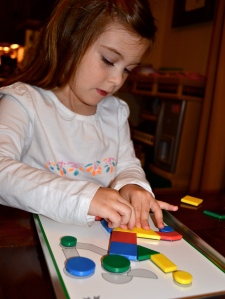 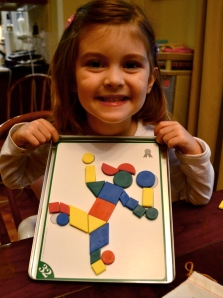 The only thing clear in our quest to raise a smart, confident and strong young woman is we’re winging it. Going on gut instinct. Taking lessons from our mothers and fathers and those influential members of our little community of friends and family, implementing what has shaped and inspired us. Teaching her good morals and giving her the tools to succeed. Letting her fall once in a while because it will keep her grounded and might just motivate her to reach higher or try something new. Encouraging her to dream, and, ahem, letting her know it’s okay to change your dreams along the way.

Oh, and I don’t think there’s any harm in agreeing with her if she comes home from school and tells me “math class is tough”.

One thought on “Fostering Girl Power”